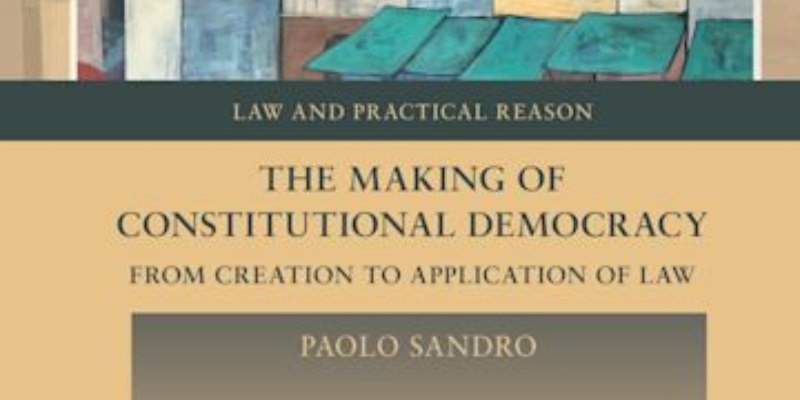 The book is called “The Making of Constitutional Democracy: From Creation to Application of Law”.

School of Law academic Dr Paolo Sandro’s first book “The Making of Constitutional Democracy: From Creation to Application of Law” (Hart 2022) investigates the distinction between the activities of law-creation and law-application and underscores its relevance for legal, constitutional, and political theory. The book has received an impressive reception from the first reviewers.

“In this book, The Making of Constitutional Democracy: From Creation to Application of Law, Paolo Sandro has done what few in recent common law scholarship have attempted: presented a persuasive case for the interconnection between some issues in high legal theory and democratic legitimacy.”

Felipe Jiménez, Associate Professor of Law and Philosophy at USC Gould School of Law, in a review that will appear in print in the American Journal of Jurisprudence in 2023, notes: “The Making of Constitutional Democracy is a rich and sophisticated book. Its bibliographical apparatus is simply breathtaking. The depth of Sandro’s engagement with multiple areas of legal theory is remarkable”.

Finally, Sebastian Lewis from the Faculty of Law at the University of Oxford has also reviewed the book highlighting “the rigorous way in which Sandro deals with each of these challenges, plus the impressive arsenal of analytical tools he deploys for that task, are further proof of Sandro’s ambitious project. The book is also rich in historical, philosophical, and comparative analysis”.

"These reviews highlight the strength and depth of Paolo’s argumentation and are helping to shape the Centre for Law and Social Justice’s ongoing commitment to building strong and resilient communities. Paolo’s work on Constitutional Democracy is foregrounding the way we think about enacting and applying both law and justice.”

Dr Sandro was also interviewed by the IACL-AIDC Blog (The International Association of Constitutional Law) about his book.

Listen to Dr Sandro present the book, in a brief vlog for the Italian comparative law journal Diritti Comparati.