Task-based language teaching (TBLT) is a learner-centred and experiential approach to language pedagogy.

Central to TBLT are the notions that language learners ‘learn to communicate by communicating’ (Nunan, 2004, p. 8), and that second language acquisition (SLA) is developed by engaging learners in ‘real language use in the classroom’ through tasks (Willis & Willis, 2007, p. 1).   The approach claims significant support from experimental research studies that have aimed to demonstrate how, and in what respects, tasks can and do promote SLA. However, favourable research findings are not necessarily finding their way into classrooms, and TBLT remains in practice a contested endeavour.  As Long (2016: 28) put it, TBLT is ‘still a relatively recent innovation – one whose adoption requires expertise.’

This workshop has the following aims which will balance theory with practice:  First I will (1) provide a brief introduction to the phenomenon of TBLT and how TBLT differs from more traditional approaches to language teaching and learning; (2) go on to consider what a ‘task’ might look like, in theory and in practice. Then, participants will: (3) look at a range of tasks that have been developed for the instructed foreign language classroom in New Zealand, and evaluate them for their task-likeness; (4) come up with some task-based ideas for a selected typical language learning topic. It is hoped that, by the end of this workshop, participants will have a clearer theory-informed idea of what a task is for the task-based language classroom alongside deeper understanding of the challenges of creating valid language use tasks. 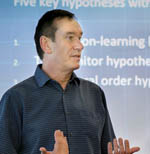 Speaker: Martin East is Professor of Language Education in the School of Cultures, Languages and Linguistics, Faculty of Arts, at the University of Auckland, New Zealand.  His research sits at the intersection between second language acquisition, language pedagogy and teacher education, and he publishes widely in areas related to stakeholders’ reception of innovative practices. He is currently President of the International Association for Task-Based Language Teaching, a worldwide organisation of scholars interested in and active contributors to the field of TBLT.