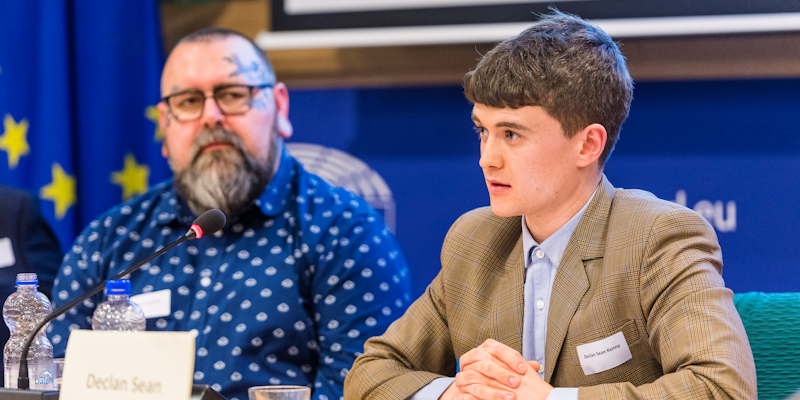 Declan Sean Kenny, PhD researcher in Political Theory, delivered a speech at a White Rose Brussels Climate Change event, after being selected as the winner of their article competition in February.

The event, Adapting to Climate Change: are our solutions working?, was held in the European Parliament on Wednesday 20 February 2019, and showcased research from each of the White Rose universities (Leeds, Sheffield and York) to address key climate change policy areas. The event brought together an audience of diverse stakeholders including academics, EU officials, MEPs and European Commission representatives. Declan joined a panel of distinguished speakers including Gerda Verburg, United Nations Assistant Secretary General, who delivered the keynote speech. You can read more about the event on the White Rose Brussels website.

The opportunity to present was awarded to Declan upon winning White Rose Brussels' article competition in January. The competition tasked students - from across the White Rose universities - to create an original article on climate change policy. Declan's winning article looks at the EU's Emissions Trading Scheme and Urban Agenda and argues that the EU must lead the way in getting tough on big businesses. The article, "Getting tough: resolving the double standard before it is too late", is available to read in full on the White Rose Brussels blog.

Fellow panellist Duncan Cameron, Professor of Microbiology at the University of Sheffield and Director of the Plant Production and Protection (P3) Centre, tweeted:

Professor Jason Ralph, Head of the School of Politics and International Studies at the University of Leeds, said: "This is a fantastic achievement which I am sure will be an inspiration for all our students. On behalf of the School, I congratulate Declan on his success".