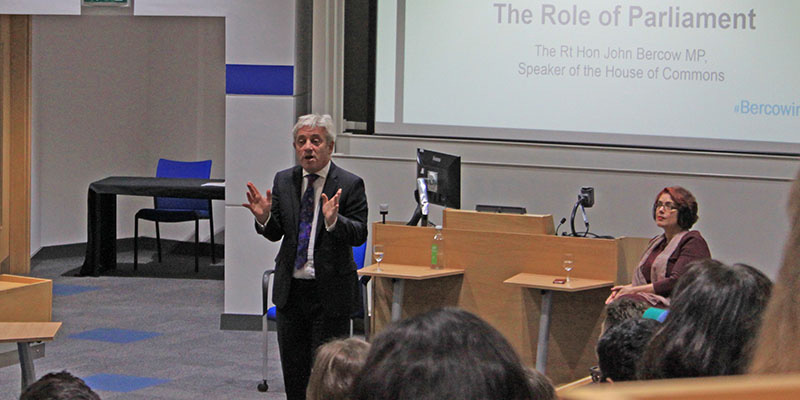 On Friday 3 November we were delighted to invite Rt Hon John Bercow MP to campus.

Following a seminar with our Politics with Parliamentary Studies Pathway students, Mr Speaker presented to a wider audience from across the University. His talk was introduced by Professor Cristina Leston-Bandeira, who Mr Speaker has invited to be a Commissioner in the Digital Democracy Commission, which he referred to as a valuable addition to Parliament’s work towards becoming a more modernising institution. 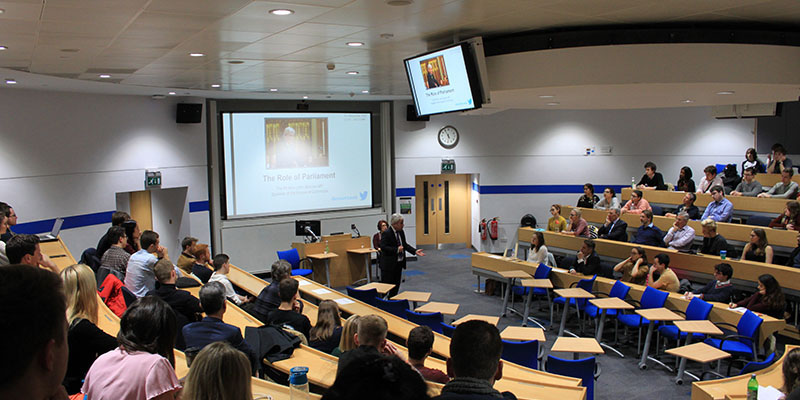 Mr Speaker John Bercow presenting a lecture on the Role of Parliament.

On his first visit to campus, Mr Speaker began by reflecting on our institution and our global renown before highlighting the benefits and opportunities presented by the Politics with Parliamentary Studies Pathway offered by the School. Reflecting on his education and that of his family Mr Speaker highlighted how university has an impact on your future.

Both humorous and informative, Mr Speaker recalled stories of his time as Speaker and his views on the role as ‘the back-benchers’ champion’ as well as the role of Parliament more broadly. Recalling his mission to redress the balance between government and Parliament, he discussed some of the ways he’s been tackling this since his election in 2009.

Central to his talk was the need for change and the role of the Speaker to effectively scrutinise and facilitate opinions whereby, "you can either be a reforming Speaker or an uncontroversial Speaker. You cannot be both".

A Q&A followed the talk with a range of questions from the audience including diversity in Parliament, article 50, and devolution.