The war of words with terrorism 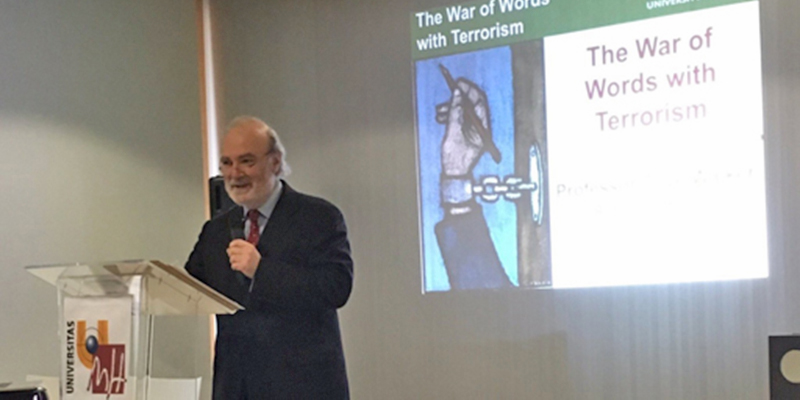 The war of words with terrorism, was the title of a keynote speech given by Professor Emeritus Clive Walker at a conference in Spain on 1-2 December 2016.

Professor Walker was invited to the ‘International Congress on Crime and Cyberspace’, the subject of which was 'Challenges for the 21st Century: Radicalism and hate on the Internet: from understanding towards prevention'. The event was funded by the Ministry of Education, Research, Culture and Sport and was held over two days at the Universitas Miguel Hernández (UMH) in Elche. A large audience of professionals and students were in attendance.

Professor Walker argued that terrorism speech presents multiple dangers for liberal democracies: some relate to the mechanics of how to carry out attacks; some relate to the fostering of motivations to become involved in terrorism through incitements; some arise from the censoring process which can threaten cherished values or drain the state resources. He then explored responses in terms of action against messengers through the imposition of criminal laws.

However, the limited number of prosecutions suggests inefficiency, save perhaps for symbolic denunciation. Prosecutions encounter principled (human rights) objections and practical problems of evidence-gathering and transnationality. So, the second, more prevalent and sustainable, approach involves administrative controls, as reflected in police internet referral units and by private sector denunciation mechanisms.

These interventions work surprisingly well with a high volume of traffic. But like all corporatist arrangements, we must question whose interests are being served and the fairness of the process. In an ideal speech situation, the fostering of convincing messages against terrorism would be a preferable approach. Paradoxically, fuller debate about values may arise through the advent of a third approach which involves countering violent extremism (CVE) programmes.

These programmes are viewed simplistically by some as repressive. However, CVE programmes could become a platform for the public debate of issues around violent extremism rather than its censure.